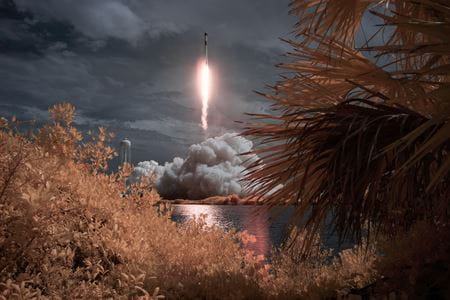 A SpaceX Falcon 9 rocket carrying the company's Crew Dragon spacecraft is seen in this false color infrared exposure as it is launched on NASA’s SpaceX Demo-2 mission to the International Space Station with NASA astronauts Robert Behnken and Douglas Hurley onboard, Saturday, May 30, 2020, at NASA’s Kennedy Space Center in Florida. The Demo-2 mission is the first launch with astronauts of the SpaceX Crew Dragon spacecraft and Falcon 9 rocket to the International Space Station as part of the agency’s Commercial Crew Program. The test flight serves as an end-to-end demonstration of SpaceX’s crew transportation system. Behnken and Hurley launched at 3:22 p.m. EDT on Saturday, May 30, from Launch Complex 39A at the Kennedy Space Center. A new era of human spaceflight is set to begin as American astronauts once again launch on an American rocket from American soil to low-Earth orbit for the first time since the conclusion of the Space Shuttle Program in 2011. Photo Credit: (NASA/Bill Ingalls)

The Kacena lab is quite familiar with launch delays, and so when last week's much-anticipated lift off of two NASA astronauts from Cape Canaveral was scrubbed due to ominous weather conditions, we could relate to the team’s disappointment with having to wait a bit longer before their efforts would speed toward the International Space Station.

Prior to the launch attempt, local Indianapolis TV station WTHR caught up with Dr. Kacena and Zack Campbell (Marian medical student and the lab’s space geek) to share their perspectives about the historic SpaceX launch. Even though the mission was suspended, their interview aired on Wednesday evening. Check out the various links below to see how the Kacena lab was, once again, is being covered in the news!