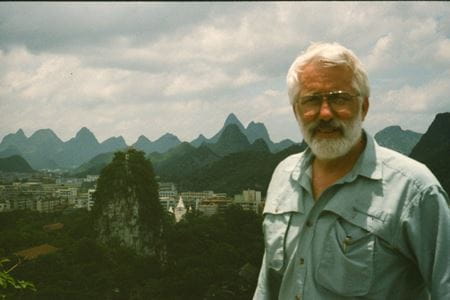 Dr. William Forgey inched his way forward as a 65-miles-per-hour wind howled and whipped glacier snow around his face. In front of him, a pair of medical students crept along, slowly picking their way back from a camp to the physicians’ hand-built cabin in the wilds of Northern Manitoba.

For decades, Forgey wracked his body and tested his mind by pushing into empty regions of a map. But on this day, a thought crossed his mind – a tinge of doubt in environs unforgiving to those who fall prey to worry.

“Why am I even doing this?” Forgey wondered. “Am I trying to prove something?”

A student peered back, his face peeking through the tightly drawn hood of his parka. He stopped, leaned in and pressed his face to Forgey’s ear.

“Isn’t this great” he yelled.

Now at 76 years old, Forgey’s adventures involve less risk to life and limb, but the native of Gary, Indiana, still holds an important moniker: The Father of Wilderness Medicine.

Before he became a family practitioner, Forgey was inducted as a member of The Explorer’s Club and was known for his forays deep in the wilds of northern Saskatchewan and Manitoba. But it was at Indiana University School of Medicine, where he graduated in 1975, that he merged a passion for science with conquering the unknown.

“When you’re in the wild, what’s the one thing you worry about? Am I OK” Forgey said. “Am I OK?” “When I was sitting in my classes, I was constantly thinking about, ‘Oh, so that’s how we’d treat this in the wilderness.”

In the early ’70s, texts outlining medical care in remote and harsh settings – if they existed at all – were often overly technical or recommended aggressive approaches. What Forgey found, though, when his classmates peppered him with questions was a need for quick first-aid and triage techniques.

“You don’t go into these deep wilderness areas if you’re totally worried about medical issues, but it is something to think about,” he said. “And there was nothing written about it. Nothing.”

So, he started typing up short handouts, which he distributed to increasingly filled auditoriums as word about his background and experience filtered out.

Growing up few would have pegged Forgey for an outdoorsman. Outside of an occasional family trip to fishing camps in northern Wisconsin, he didn’t live in nature. Like many kids his age, he wore a coonskin cap and gobbled up episodes of Davy Crockett, but he quit the Cub Scouts almost as soon as he joined. “I thought it was just doing crafts stuff in a basement,” Forgey said.

Acquiring a suite of skills to survive in the wild didn’t occur until he graduated from IU Bloomington in 1964 with a bachelor’s degree in chemistry. Forgey enlisted in U.S. Army, training for the infantry. When he was shipped to Fort Bragg in North Carolina, local Boy Scouts drafted him as a volunteer. Impressed by the Scouts programming, Forgey took almost every adult training course offered, eventually earning his Wood Badge.

Between his military training, including a 30-month tour in Vietnam, and the Scouts, Forgey built an impressive array of skills. He’d put them to use after exiting the Army and going on expeditions into the Canadian Wilderness, such as a two-month long canoe trip to Fort Churchill on the Western shore of the Hudson Bay.

Exploring the river systems in northern Canada eventually led him to a modest site on the shore of a tributary to the Churchill River. Forgey placed four cornerstones, petitioned the Canadian government for a lease and slowly built out a rough-hewn cabin from nearby black spruce trees in the clearing – a base of operations for many of his adventures.

By the time Forgey graduated from IU School of Medicine, he’d written enough handouts on wilderness medicine that it only made sense to consolidate them. Just four years out of medical school, he published the first edition of Wilderness Medicine in 1978.

On top of publishing the book, which is now in its seventh edition, Forgey hit the road to lecture at schools, outdoor clubs and REI stores, sometimes moving presentations into the parking lot to prevent overcrowding. At its peak, demand forced him to practice three days a week and travel to three different cities in as many days to make presentations.

And that didn’t include carving out times for expeditions and adventures of his own. Today, though, the crowds have ebbed. “That’s a testament to how accepted this stuff is now,” Forgey said. “It’s just normal. The topic is so far advanced that it’s now branched out into areas like search-and-rescue. It’s taken on so many aspects. The simple stuff I was doing back then won’t pack people in.”

So what encompasses wilderness medicine?

An example might work best. Let’s say a hiker took a fall negotiating a steep descent on a trail. He suffered a sprain. A wilderness physician not only diagnoses the injury and splints it, but calculates risk. Can the patient slowly walk back to the trailhead? What are the complications? Will this add time? Are others in the party put at risk?

“Normally we might say a person should call 911,” Forgey said. “But it can be a $40,000 decision if you call in a remote evacuation and put others at risk.”

In the wild, seemingly routine injuries – sprains, blisters, mild burns – become magnified because of the elements. Often, Forgey said, exposure and hypothermia result from unplanned nights outside. Simply falling behind schedule can ultimately wind up dangerous.

Forgey is also still pushing the evolution of the field.

Thirty years after he first edited and sculpted the Wilderness Medical Society’s guidelines for emergency care, the protocols are solidly evidence-based and outline different standards for physicians, nurses and physicians assistants. Over the past several years, Forgey’s helped lead the drafting process of a wilderness first-aid guide for the Boy Scouts.  Additionally, Forgey teaches for IU School of Medicine where he earned the inaugural Alpha-Omega-Alpha Volunteer Clinical Faculty Award in 2000. There’s also a day job overseeing Correctional Health Indiana, which manages medical care for Lake County Jail. “I’m going all the time,” Forgey said.

Recently, however, he was in Haiti, bumping and jostling along a rural road to ferry precious cargo. Four times a year, Forgey completes the three-hour trek into Verrettes, a rural town located in the country’s wooly interior, to deliver medicines and other supplies to a clinic run by Medical Student Missions.

To Forgey, coordinating logistics, marshaling people and materiel is an adventure with a higher purpose. No, he’s not as athletic. Arthritis has slowed him. And he still wonders sometimes, even amid the rumbling of old engines, what he’s trying to show the world.

“It’s still a big adventure,” he said. “It means something, and I can still crawl off that Jeep.”